skip to main | skip to sidebar

I was traveling home and a Police car came flying past me! I wondered where he was going in such a hurry?

I arrived at home shortly afterward and walking inside, I found my wife on the phone with a friend who has a police scanner. A 19 year old youth was killed in an auto accident, just moments earlier. Now I know where that police car was headed.

I wish you all a Merry Christmas and a Happy New Year! I hope that you'll all be careful in your travel and in your celebrations. Common sense self defense dictates that you be aware and if you drink, please don't drive. See you in 2010!
Posted by Ronin at 3:59 PM No comments:

Self Defense for Women - Alternatives 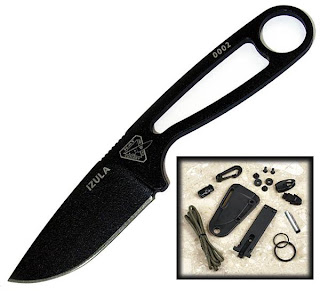 Last week we looked at the Kubotan as an impact striking device. As mentioned, it can be used to strike vulnerable areas on an attacker or used as a handle to swing your keys in a raking motion.

Previously, we looked at the use of simple OC pepper spray to blind an opponent while you make a getaway or mount a counter defense.

Today let's escalate your self defense alternatives. I own a couple and there are many out there, but my favorite self defense / EDC (every day carry), small fixed blade knife is the RAT IZULA, named after the fiery bullet ant of South America.

It's very versatile and can be worn as a neck knife, lashed to any sort of bag or camping gear, in a pocket, on a belt - your imagination is the limit. The kit comes with the basic knife, a well made sheath, a fire-starter, an emergency whistle, paracord for wrapping the handle and more.

I purchased mine from Knife Works at a very affordable price. I chose the black model depicted above. But, they come in Pink, Desert Tan, Olive Drab, or Stainless.

The IZULA is a workhorse for a small knife and will take all the use and abuse you can throw at it. IMO, it's a must have survival knife in the woods or in the streets. Just watch the video below to see the IZULA in action!

There are plenty of cheap knives available and they are always useful tools to have on hand. See you soon!

Self Defense For Women - Alternative Weapons

When I began my karate training over 36 years ago, my Sensei always mentioned that everything around us was a weapon. He would expound upon the virtues of an ashtray or a shot-glass to the attackers head. An umbrella used in a stabbing manner or a cane used to strike an opponent - just about anywhere.

In self defense courses for women, there is usually some mention of the use of keys. Keys can be used between ones fingers to rake or stab at an assailant's face or eyes. Most often, the use of Kubotans are demonstrated as keychain weapons. You can use the lightweight kubotan by itself with a tight grip, to concentrate a tremendous amount of force in a strike, to soft areas of the body. They're usually available with pointed or flattened tips at the striking end.

With your keys on a kubotan you hold this nifty little weapon and swing them into an attacker's face, producing a high velocity rake that may offer you the opportunity to run away, or mount a counter attack if you feel you have no other option.

Everyday objects are all around us and they can indeed be used as weapons. All it takes is a little bit of creativity and the determination to survive to make them work. See you soon!